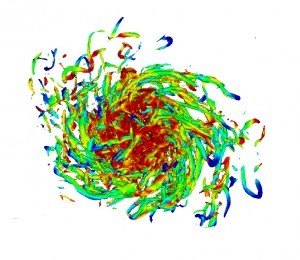 ConFlux is a cluster that seamlessly combines the computing power of HPC with the analytical power of data science. The next generation of computational physics requires HPC applications (running on external clusters) to interconnect with large data sets at run time. ConFlux provides low latency communications for in- and out- of-core data, cross-platform storage, as well as high throughput interconnects and massive memory allocations. The file-system and scheduler natively handle extreme-scale machine learning and traditional HPC modules in a tightly integrated work flow—rather than in segregated operations—leading to significantly lower latencies, fewer algorithmic barriers and less data movement.

All compute and storage is connected via a 100Gb/s InfiniBand fabric. The IBM and NVLink connectivity, combined with IBM CAPI Technology provide an unprecedented data transfer throughput required for the data-driven computational physics researchers will be conducting.

ConFlux is funded by a National Science Foundation grant; the Principal Investigator is Karthik Duraisamy, Assistant Professor of Aerospace Engineering and Director of the Center for Data-Driven Computational Physics (CDDCP). ConFlux and the CDDCP are under the auspices of the Michigan Institute for Computational Discovery and Engineering.

Back to Systems & Services

A portion of the cycles on ConFlux will be available through a competitive application process. More information will be posted as it becomes available.